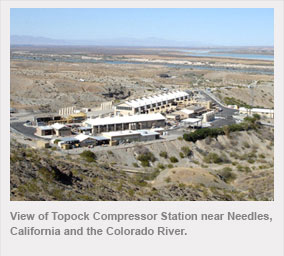 The Topock Compressor Station is located in eastern San Bernardino County, approximately 12 miles southeast of Needles, and has played an important role in supplying natural gas to our service areas in Central and Northern California since 1951.


Topock Compressor Station and others like it are needed to safely pressurize natural gas, moving it through hundreds of miles of pipeline on its way to homes, businesses and other gas customers.


The temperature of natural gas increases during compression, and the gas must be moved to cooling towers. To prevent corrosion of cooling tower equipment prior to 1985, Industry Standard added chromium compounds to the water used in the cooling towers and other equipment.


This practice was employed at the Station until 1985, with cooling tower wastewater containing hexavalent chromium being discharged into the adjacent area through 1964. Additionally, historical waste handling and disposal practices resulted in the contamination of soils in certain areas at and around the Station.


In our commitment to safety, reliability and environmental stewardship at the Topock Compressor Station, PG&E voluntarily partnered with numerous entities going back to 1996 to address these issues.
Partners include the California Department of Toxic Substances Control (DTSC), the U.S. Department of the Interior (DOI), several nearby communities and Native American Tribes. Tribal and agency representatives play a vital role in monitoring our daily project activities.

Extensive environmental studies have been conducted at the Topock Compressor Station and surrounding area. These studies guide cleanup and stewardship activities and ensure compliance with all operating permits and regulatory requirements for the Topock Remedy Construction Project. For example:

Learn more about the Topock Program


Read about accomplishments and other Topock project highlights (PDF, 590 KB)

Learn more about recent activities in this DTSC factsheet about Topock (PDF, 1.42 MB)

If you have any questions about the compressor station or our cleanup efforts, call us at 1-866-247-0581 or email us at remediation@pge.com.