Our high-definition EarthCam atop PG&E headquarters in San Francisco's Financial District provides a year-round, bird's-eye view (pun intended) of the peregrine's daily life for legions of bird fans across the world. Viewership surges each spring, when the falcons prepare to nest. In the 2020 nesting season alone, this page recorded more than 100,000 visits.


As always, nature makes its own rules. Sometimes the falcon parents successfully raise young on the PG&E building, and sometimes they don't. And, even when they do, the eggs don't always hatch. That said, watching the parents protect and feed their young and seeing them grow from fluffy blobs to young birds taking their first flight is quite an experience.


Learn about PG&E's efforts to support the once-endangered species


PG&E continues to support the recovery of California's peregrine falcon population, which was once near extinction. The company's support includes grants to the Santa Cruz Predatory Bird Research Group's education programs.


Falcons have been nesting on PG&E's 77 Beale Street headquarters most years since 2004, producing more than 45 falcon chicks in the last decade alone. In recent years, the falcon parents have produced clutches of four eggs in February or March. Mom and dad typically take turns sitting on the eggs for a month to keep them warm. Usually, most of the eggs hatch; the parents then feed the babies as they grow from white fluff-balls to full-sized falcons with dark feathers in just six weeks. 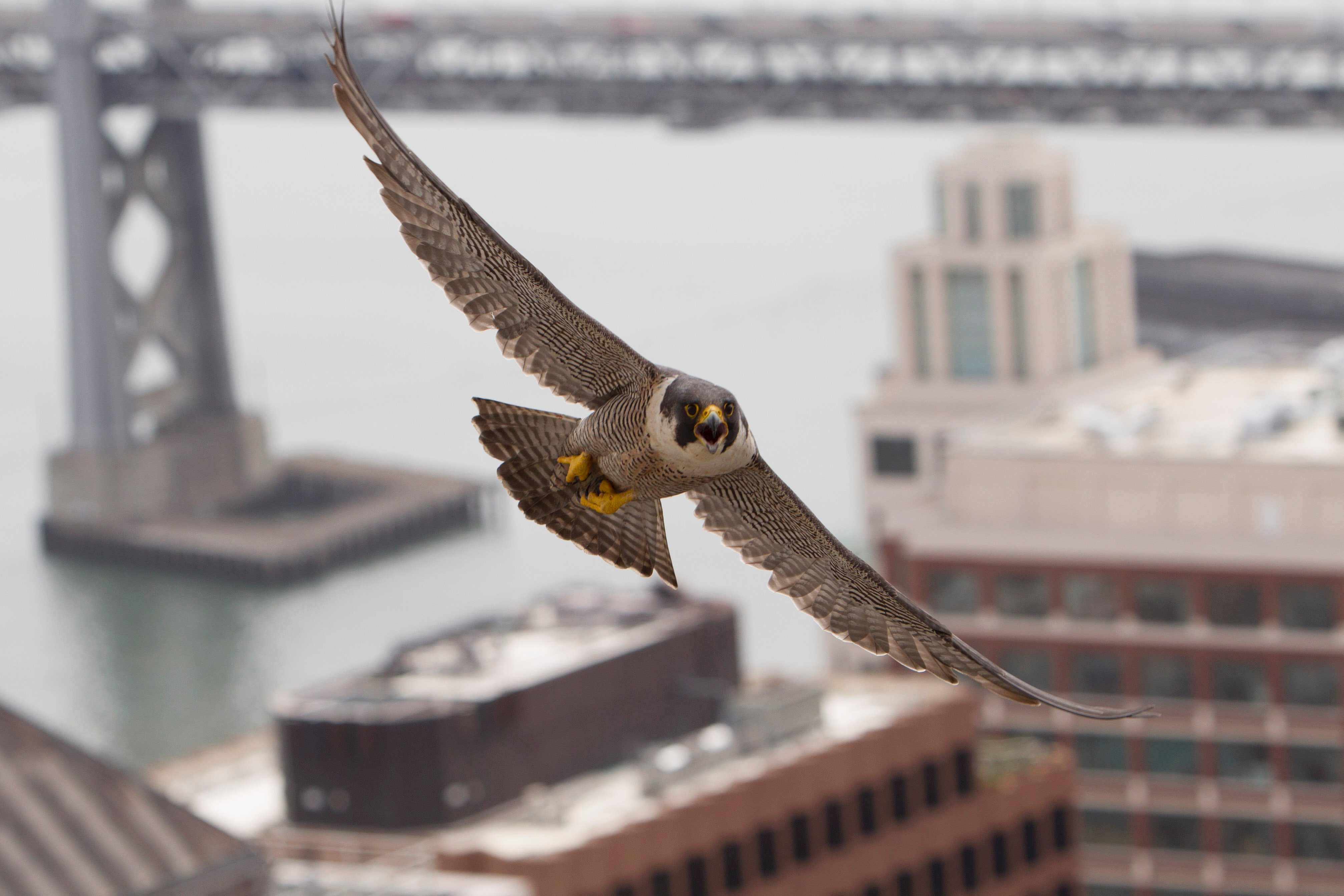 Those first flights, and especially the first landings, represent a perilous time in the life of a young falcon. That's especially true in the bustling downtown of a major city where the ground is 300 feet below, skyscrapers have glass windows, unpredictable winds blow in the canyons between buildings and crows and other predatory species lurk.

Those potential hazards mean mixed results for each clutch. Of the recent years that have produced live young, two of the three baby falcons in 2019's clutch survived, while just one of three fledglings from 2018's clutch made it past the first few months. But there are great successes, too: One male from 2011's clutch maintains a successful nest that he pioneered on the Richmond waterfront.

PG&E has provided about $300,000 in grants to the Predatory Bird Research Group since 1998 to support community outreach and education programs. The PBRG also uses the PG&E nesting site to study how urban factors, climate and individual bird physiology affect egg-laying dates, which have slowly crept backward from mid-spring to mid-winter in recent years.

Between World War II and the 1970s, the peregrine falcon population nearly disappeared due to toxic chemicals. But thanks to the Endangered Species Act and the good work of groups such as the PBRG, there are now about 300 pairs of peregrine falcons in California. Bird watchers have identified other banded Bay Area falcons as far away as Arcata to the north and Morro Bay to the south.