Compressed air energy storage (CAES) is a promising energy storage technology that can lower costs for customers and reduce greenhouse gas emissions through a greater integration of renewable energy sources. PG&E is engaged in a project to explore the use of CAES to power generators during peak periods when the energy is needed most.

We’re committed to reaching California’s mandate of meeting 50 percent of the state’s electricity demands with renewable energy such as wind and solar power by 2030. A key challenge of this ambitious goal is the unpredictable nature of most renewable energy sources. Energy storage, such as CAES, can store energy produced during low-demand times to use during high-demand times and can potentially contribute to grid efficiency, reliability, and may reduce the need to build additional fossil-fueled generation.

Understand the history of our CAES project

Following is an overview of the CAES project history:

CAES uses energy during low demand periods to compress air. Then it injects the air into a depleted natural gas reservoir. Next, the compressed air is used to power a generator during times when energy demand is highest. 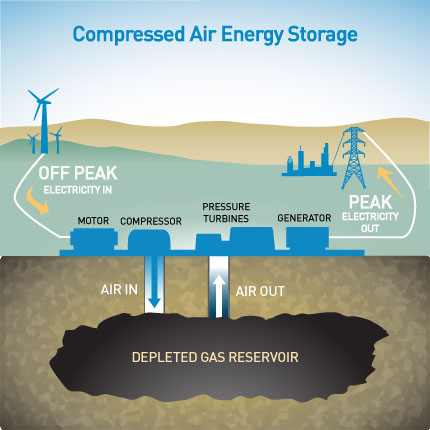 The proposed commercial-scale project has a nominal output capacity of up to 300 megawatts (MW). The output is similar to the output that a mid-sized power plant can generate for up to 10 hours. We estimate that a commercial plant could be online in the early or mid-2020s.

Two CAES plants are currently operating. One plant is located in Alabama and the other plant is in Germany. Both have operated safely and reliably for more than 50 years, combined. The plants use an underground cavern created in a salt formation. However, this type of salt formation is not commonly found in our territory.

PG&E is conducting the CAES project in three primary phases:

Phase 1 is funded. At the end of Phase 1, we will decide whether to seek the required regulatory approvals to proceed to Phase 2.

Get more information from the following resources:

Check out the information in these helpful links