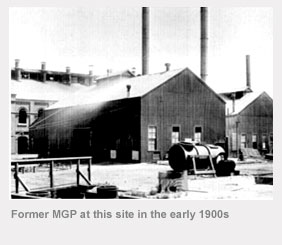 The plant was originally operated by the Independent Gas and Power Corporation, founded by the owner of Spreckels Sugar Company. Mr. Claus Spreckels entered the gas and electric business in 1901 and by 1902 had built a gas plant adjacent to his sugar factory. The plant site was located along Delaware and 23rd (formerly Nevada) Streets near the Bay shore.

When PG&E was formed in 1905, the company acquired both the Potrero and Adjacent to Potrero gas plants. The properties were later sold, and a warehouse currently occupies this site.