The Sacramento MGP was in operation between 1873 and 1930 and was used to supply the area with gas to light and heat local homes and businesses. After being maintained on standby through World War II and the 1950s, the MGP was permanently decommissioned and demolished in 1961. 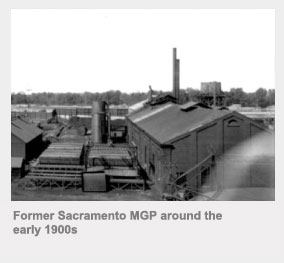 PG&E's site investigation in the 1990s resulted in an approved Remedial Action Plan (cleanup) to remove impacted soil above the groundwater table, install a cap to protect against public exposure to gas plant residues in deeper and inaccessible soils, and operate a system to remove and treat groundwater at the site, all of which were successfully implemented.

In July 2011, DTSC approved PG&E’s Remedial Action Plan, which recommended ISSS of contaminated material within the groundwater as an enhancement to the groundwater remedy. While the use of ISSS for an MGP site is new to California, it has been proven effective throughout the United States. Remediation work utilizing ISSS began in spring 2012 and was completed in November 2012. This technology involved combining a cement-based mix, which included activated carbon, into the soil using large diameter augers and shallow bucket mixing to treat impacted soil to a depth of up to 45 feet below the existing ground surface. This mix binds together the contaminated soil to hold and immobilize the contaminants, and allow clean groundwater to flow around the contaminated soil. In early 2013, a low permeability cap was placed over the final surface to prevent rainwater infiltration into underlying soils.

Sustainable practices are important to PG&E; we try to reduce our carbon footprint on environmental remediation projects to the greatest extent possible. On this project, the technology was a sustainable remediation solution. All soil remained on-site; only debris was removed. Overburden soil (that did not need to be stabilized), was excavated, stockpiled and managed on-site for reuse. Most of the contaminated material is contained on-site, within the stabilized columns. These actions allowed PG&E to conserve landfill space and significantly reduce the truck traffic that would be required to haul away and to import soil.