The former North Beach manufactured gas plant (MGP) operated in what is now known as the Marina District of San Francisco, near the area north of Bay and Buchanan Streets. PG&E was formed in October 1905 and operated the North Beach MGP from then until April 1906, when it was damaged in the Great Earthquake and ceased operations. After the 1906 earthquake severely damaged the Marina MGPs, the former MGP properties as well as other properties in the area were acquired by the City for the development of the 1915 Pan Pacific Exposition. Residential and commercial development followed. 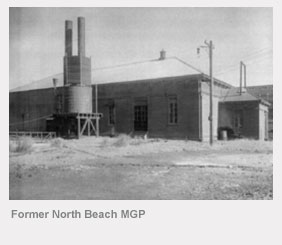 In 2010, PG&E began conducting a voluntary program under the oversight of the California Department of Toxic Substances Control (DTSC) to sample for residual materials that may be present at the site of the former North Beach MGP. If DTSC determines that remediation activities are necessary, we'll work closely with the agency, residents, property owners, and City health and environmental departments to design the most effective remediation program for the site.

PG&E’s program includes two other historic gas plant sites in San Francisco, near the area west of Fillmore Street and Bay Street also in the Marina District and near the intersection of Beach Street and Powell Street in the Fisherman’s Wharf area.

Under the oversight of the California Regional Water Quality Control Board, San Francisco Bay Region (Water Board), PG&E is also working with the San Francisco Recreation and Parks Department on its San Francisco Marina Improvement and Remediation Harbor Project, as sediments in the East Marina Harbor are impacted by the former gas plant as well as other operations in this area.

PG&E is conducting sampling and remediation work in the Marina District under the oversight of DTSC as part of our MGP program. Soil samples have been collected from private properties where property owners have provided access, as well as from public right-of-ways (with approval from the City and County of San Francisco) such as sidewalks.


The information collected from the sampling and remediation will help PG&E in its effort to characterize conditions in the area, and will be made available to the public.


The Remedial Action Plan (RAP) for PG&E's former North Beach and Fillmore MGPs provides a general overview of the remedial alternatives for the sites.


Since 2010, PG&E has reached out to area residents, businesses and property owners and conducted several open houses. These efforts have included telephone outreach and direct mail to ensure the local community is fully informed of the planned work and has the opportunity to ask questions. Together with DTSC, we hosted a public meeting on the Remedial Action Plan in April 2012. Since then, PG&E and DTSC have hosted numerous public informational meetings, met individually and in small groups with residents, and have a dedicated phone number, website and local community office to answer residents’ questions. DTSC also sends regular work notices to the neighborhood regarding sampling and remediation activities.

If you would like more information about our program or would like to make an appointment to visit us in person at our neighborhood office, please call us at 415-973-0270.