History: The former Santa Cruz manufactured gas plant (MGP) operated from 1867 to about 1930. The MGP was located southwest of the intersection of North Pacific Avenue and River Street in Santa Cruz, which, is now a commercial/industrial area. PG&E acquired the property in 1954, and all MGP related structures were removed by the 1960s. PG&E sold the parcels in the 1970s, which were then redeveloped into commercial office space during the 1980s. PG&E and Chevron Environmental Management Company (PG&E/Chevron) performed a joint cleanup of the former MGP, as both companies once owned the property. 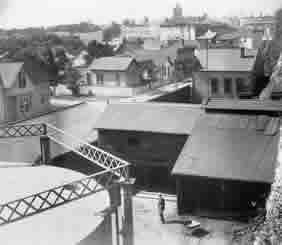 Overview: PG&E/Chevron conducted several phases of investigation on soil and groundwater at the site to determine the extent of remediation necessary. This work is part of a voluntary program under the oversight of the California Department of Toxic Substances Control (DTSC).

PG&E/Chevron completed cleanup work at the site from September 2012 to March 2013. Soil containing historic gas plant residues was excavated from various areas of the site and disposed of at a permitted landfill. Excavated areas were backfilled with clean fill and the parking lots were repaved. 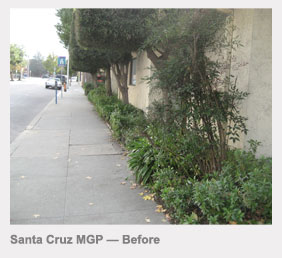 Community Benefits: Upon completion of cleanup work, the exterior areas of the site were landscaped with a variety of drought-tolerant, water wise plants and hard and soft landscaping. Landscaping installed was designed to promote public safety, prevent loitering and blend in with the downtown architecture of Santa Cruz. 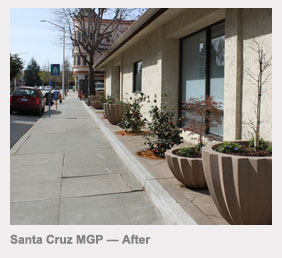 Sustainability: Sustainable practices are important to PG&E. We try to reduce our carbon footprint on environmental remediation projects to the greatest extent possible. During this work we reduced greenhouse gas emissions by 40 tons, recycled 115.5 tons of material and disposed of 40 tons of green waste. This project also contributed $782,450 to the local economy, which included the use of local contractors and local laborers.