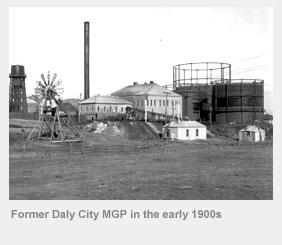 The former Daly City manufactured gas plant was located at the current site of PG&E’s Martin Service Center at 731 Schwerin Street in Daly City. Investigation and remediation of gas plant residues was completed at the service center property in 2008 and at the adjacent Midway Village housing complex in 2003.

The California Department of Toxic Substances Control (DTSC) monitors site conditions to determine that remedies put in place continue to be protective of public health and the environment. Reports are available from the most recent reviews, conducted in 2010 at Martin Service Center and in 2008 at Midway Village.

PG&E operated the former Daly City manufactured gas plant from 1908 until 1913, dismantling it in 1916. The federal government acquired the former gas plant property in 1944 and used soils from the property to fill an adjacent parcel where it built a wartime housing complex. In the 1970s, the buildings were torn down and San Mateo County constructed the Midway Village public housing complex on the property. PG&E reacquired the Martin Service Center property in the 1970s.